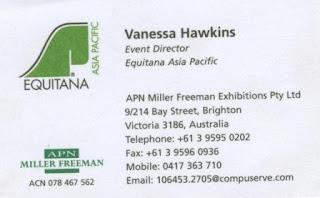 This was an amazing opportunity to further her work in promoting the horse industry, so she wound down her other activities to concentrate on the event.

Equitana is an exciting event which has been run in Essen, Germany since 1968 and now attracts well over 300,000 people. However, it was relatively unknown to the Australian industry back then and required a lot of ground work and positive talking to bring it together.

The normal structure of this amazing event consists of three main elements - Exhibition, Education and Entertainment held over four days in one venue.
However, EQUITANA Asia Pacific attracted considerable support from the Victorian Government who requested a fourth element of international competition.
This was achieved with the 1999 event held over ten days using Werribee Park Equestrian Centre and the Melbourne Convention Centre. The event showcased the Australian horse industry in its entirety for the very first time, attracting over 70,000 people and receiving many awards due to its success.